Up This, Christian Soldier 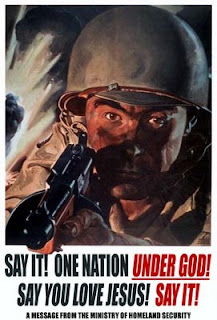 An Army specialist who served two tours of duty in Iraq sued Defense Secretary Robert Gates and his supervising officer Wednesday for allegedly trying to force him to embrace fundamentalist Christianity and then retaliating against him when he refused.

The complaint charges that Hall, who is based at Fort Riley, Kansas, has been forced to "submit to a religious test as a qualification to his post as a soldier in the United States Army," a violation of Article VI, Clause 3 of the Constitution.

Mikey Weinstein, the founder and president of The Military Religious Freedom Foundation, in an interview, said, “It is beyond despicable, indeed wholly unlawful, that the United States Army is actively attempting to destroy the professional career of one of its decorated young fighting soldiers, with two completed combat tours in Iraq, simply because he had the rare courage to stand up for his constitutional rights and guarantees of separation of church and state against a superior officer who was forcefully attempting to intimidate him into accepting fundamentalist Christianity."

These right-wing religious zealots are nothing more than our own American Taliban. They would, if able, gladly force us all to wear a literal Burka. Forget the Bill of Rights, it has been replaced with their unique interpretation of the bible. Apostasy would be a crime. Your every act would be examined for orthodoxy. After all, they're directed by god.
Catch you later.....
Posted by GOPnot4me at 10:49 PM