but the Internet survived!

Well, so much for that theory!

I just finished watching Mr. Obama on Leno out here in Pacific Daylight Time land. I had been forewarned by Rachel and Keith and several wing-nut websites that our president had made a faux pas vis-a-vis the Special Olympics. Something about his abysmal bowling skills.

As a former Special Olympics volunteer, dedicated to the memory of my late sister Kathy (severely mentally retarded, challenged, whatever) I'm especially attuned to BS in this area.

My take on this, after viewing for myself, is; "So What!"

I'm not offended and I'm sure I speak for my family, none of whom bowl worth a shit I might add, and I find this a tempest in a teapot.
At a typical Special Olympics bowling prelim, our president would finish in the middle of the pack with a 129. So what!?!

You just know that Michelle or Drudge or Rush or Billo or Calamity will make something of this.

Well, I lived and breathed it and I say "fuck 'em". 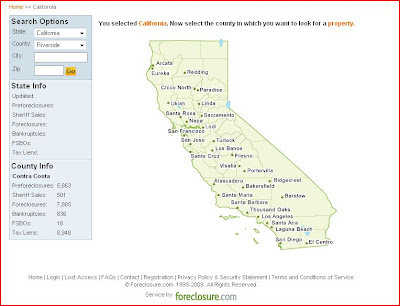 First in a series

"At night, I can hear the soft thumps as the rats land on my roof. They launch themselves from the branches of the apricot tree because they want to get inside my attic, into a house with heat.

The house next door, and the one next to that, have been empty since October. Their yards have gone feral, with hundreds of dandelion heads glistening gray in the night.

The rats are cold and hungry. The skunks have a den somewhere next door, where the metal shed was dismantled. Opossums, raccoons and lizards have colonized the abandoned yards on my block in Riverside. And it's spooky, at night, to see so much darkness, to hear skittering, to keep an eye out for homeless people trying to break in and sleep, to listen for the sounds of desperate humans and animals...."

I pass through Riverside county semi-frequently, usually on I-15, and the changes of just the last two or three years are astonishing. Go read the whole, haunting piece and get a first-hand account of the birth of a ghost town.

Look at the screen-cap above, go to the link, and look at the numbers. It will break your heart.

And these are soccer moms and dads, mostly professionals, with good educations, valuable skills, an abiding belief in the American Dream, who played by the rules and were played in return.

Losers? I don't think so. Victims of the greed of others is more like it.

Ever get a song stuck in your head?

Visit msnbc.com for Breaking News, World News, and News about the Economy

Well, if not this drug addict sex tourist, who then?

I've sure been enjoying this. Doesn't make up for the last eight years, though.

Single Payer Off the Table?

This is very disturbing:

..."Himmelstein's take - Obama is caving to the insurance industry.
"The President once acknowledged that single payer reform was the best option, but now he's caving in to corporate health care interests and completely shutting out advocates of single payer reform," Himmelstein said. "The majority of Americans favor single payer, and it's the most popular reform option among doctors and health economists, but no single payer supporter has been invited to participate in the administration's health care summit.

Meanwhile, he's appointed as his health reform czar Nancy-Ann DeParle, a woman who has made her living advising health care investors and sits on the board of many for-profit firms that have made billions from Medicare. Her appointment - and the invitation list to the health care summit - is a clear signal that the administration plans to propose a corporate-friendly health reform that has no chance of actually solving our health care crisis."
Obama to single payer advocates: drop dead."

This is very bad news.

I have worked as a health-care professional for over 35 years.

It has become my opinion over time that Single-Payer is the only thing that will save our health care system.

People who do not share this opinion tend to be the very folks who profit from the current rats nest of payers, options, coverage levels, charge-backs, write-offs, bureaucratic mazes, service denials and so many other non-medical devices meant to carve a slice out of the pie and privatize it into some one's wallet (or Swiss account).

From where I sit it seems so simple:

Expand the Medicare system to include all American citizens and fund it from payroll taxes.

The Veteran's Administration Health Care system was a terrific model of the efficiencies until Bush and his Iraq blunder and funding cuts broke it. (Seven years ago I could call and get a non-emergency appointment in less than a couple of weeks, now it can take six months to a year or more. Heckuva job, Georgie!)

Take the insurance monkey off the backs of employers. Free employers from the cost of this benefit: productivity and competitiveness are improved.

If this isn't good enough for you and yours and you can afford it, by all means, seek fee-for-service private health care. It will remain your right. Just no "opting-out". We're all in this together, it's for the good of the country and a shared burden will lessen the cost per enrollee.

And in a private practice like the ours, we will be able to practice medicine full-time again rather than spend as much as 50% of non-physician hours fighting with insurance issues. The resulting decrease in overhead would have a marvelous effect on our bottom line. (Raise, plz?)

I'm very disappointed in President Obama's stance. If he were to make a choice other than Single-Payer after giving it due consideration that would be one thing. But to choose to give it no consideration whatsoever is inexcusable.

Think again, Mr. Obama, for the health of the nation.

Update: From Crain's New York, (NY Regulators Frown on Doctor's Flat-fee System) a doctor charges a flat fee of $79 per patient, per month for affordable health care and state insurance regulators (!) try to shut him down. Sounds fishy to me. Imagine what single-payer could do with $79 per patient!

Steve Greenberg on the Curious Case of the Disappearing Newspapers 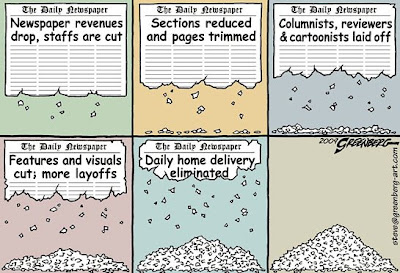 Writ much larger this is a great metaphor for the circular logic destroying the economy.

Go here to read how this happened to Steve (and many of his colleagues).

Go here to see a terrific thread from writers on the very same subject.