Triumph should have been given the Meet the Press gig!

Allan Sherman, Dean Martin and Vic Damone. OK, I give up, I'm old.

An oldy but a goody. 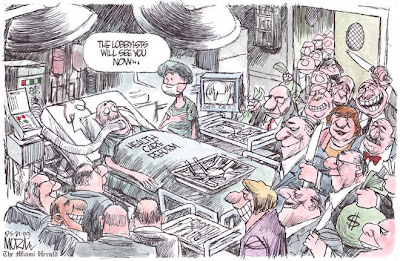 Jim Morin - Miami Herald
The influence of the vested interests will kill reform unless we holler loud enough.
Catch you later..... 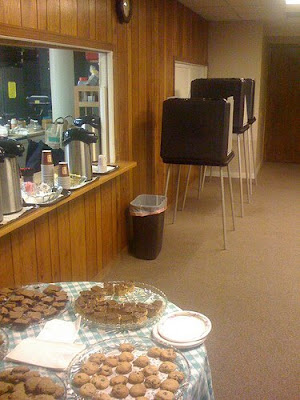 Only poll workers and voters actively engaged in voting may be within the voting booth area, but members of the public may be in the polling place to observe provided they do not interfere with the voting process.

Observers may ask poll workers questions regarding election procedures so long as they do not distract them from their duties.

Some counties and jurisdictions have different regulations but the state policy regarding media and pollsters requires them to be at least 25 feet from the polling place before speaking to voters. 35 (emphasis mine.)

So, I voted today. At lunchtime, here at the old "Branch Cascadian" compound. (Don't ask.)

Bad day at work, but at the end I thought I would visit the clubhouse where the voting was taking place to ask the nice young man I had seen earlier how the turn-out had been, what impressions he might have formed, etc. (He seemed progressive.) I said I had a little blog and just wanted to report about one small slice of the vote. It was 30 or so minutes before the polls closed.

Well, another poll worker, a fellow "Branch Cascadian" got her damn panties in a twist and she and another of the ladies behind the cafeteria tables demanded I leave. Some weird guy with a ton of 3G gear got busy on the phone.

I managed to exchange e-mail addresses with the seemingly nice young man before I was hounded out. As I left, it seemed that my answer to her inquiry, "What blog?" pissed her off further.

I went home, changed out of my work clothes, and walked back down to the clubhouse/polling place, popping in the back (unlocked) door at precisely 8:02pm. I felt like trying again.

Well, you would have thought some felony was being committed. It was "polls are closed" this and "clubhouse is closed" that (by now they had the compound manager involved in the effort to keep me from observing). My god, you'd have thought I was subverting the whole vote, for fuck sake. At no time did I interfere with the voting procedures or the duties of any poll worker.

I reminded our commandant and the objecting poll workers and anyone in listening distance that I, as a citizen, a voter and especially as a disabled Veteran, had a right to observe. The G3 phone guy ran for the hills as I was hounded out by little old ladies for the second time.

Didn't seem worth it any more.

The U.S. wastes more on health care bureaucracy than it would cost to provide health care to all of the uninsured. Administrative expenses will consume at least $399.4 billion out of total health expenditures of $1,660.5 billion in 2003. Streamlining administrative overhead to Canadian levels would save approximately $286.0 billion in 2003, $6,940 for each of the 41.2 million Americans who were uninsured as of 2001. This is substantially more than would be needed to provide full insurance coverage....

These potential administrative savings are far higher than recent estimates of the cost of covering the uninsured. For instance researchers from The Urban Institute estimate that covering all of America's uninsured with an "average" private insurance policy would cost $69 billion annually (Hadley and Holahan, Health Affairs, May/June, 2003). Thus, the $286.0 billion in administrative savings could cover all of the uninsured, with $217 billion left over to upgrade coverage for Americans who are currently under-insured - e.g. to offer first dollar drug coverage to seniors.

At our clinic, we spend fully 60+% of our non-physician hours just trying to make sense of the mess that is the American Health Insurance system. I've been griping about this for years.

When I think of all the good the wasted dollars could do, I get just a wee bit PISSED OFF!

Many of the doctors I know are finally coming around on the issue of single payer.

Why can't the pols see enormous upside to a national public system?

Mr. Obama, why is Single Payer off the table?

I gotta go cool down.

From Frank Rich at the New York Times:

...These cover sheets greeted Bush each day with triumphal color photos of the war headlined by biblical quotations. GQ is posting 11 of them, and they are seriously creepy.

Take the one dated April 3, 2003, two weeks into the invasion, just as Shock and Awe hit its first potholes. Two days earlier, on April 1, a panicky Pentagon had begun spreading its hyped, fictional account of the rescue of Pvt. Jessica Lynch to distract from troubling news of setbacks. On April 2, Gen. Joseph Hoar, the commander in chief of the United States Central Command from 1991-94, had declared on the Times Op-Ed page that Rumsfeld had sent too few troops to Iraq. And so the Worldwide Intelligence Update for April 3 bullied Bush with Joshua 1:9: “Have I not commanded you? Be strong and courageous. Do not be terrified; do not be discouraged, for the LORD your God will be with you wherever you go.” (Including, as it happened, into a quagmire.)

What’s up with that? As Draper writes, Rumsfeld is not known for ostentatious displays of piety. He was cynically playing the religious angle to seduce and manipulate a president who frequently quoted the Bible. But the secretary’s actions were not just oily; he was also taking a risk with national security. If these official daily collages of Crusade-like messaging and war imagery had been leaked, they would have reinforced the Muslim world’s apocalyptic fear that America was waging a religious war. As one alarmed Pentagon hand told Draper, the fallout “would be as bad as Abu Ghraib.”

Rumsfeld would waterboard Jesus if he thought it would serve his purposes.

Read the whole thing if you have a strong stomach.

How did these bozos get the keys to the castle in the first place?

How did my country sink so low? 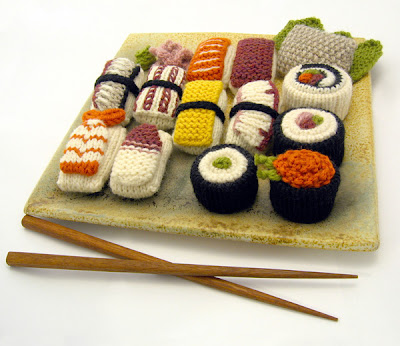 Found this while surfing Reddit. BG, can I interest you in some Sushi?

One could make a pretty compelling argument that the biggest upset of 2008 at the presidential level, bigger than even the Obama victory in Indiana, was the fact that Barack Obama stole an electoral vote from John McCain in, of all places, Nebraska.

I'm pretty proud of my peeps. And now there's more:

Tuesday night, the Democratic Party, and the voters of Omaha, made it clear that Obama's surprise single electoral vote in Nebraska was not an isolated incident.

Democrat Jim Suttle, a city councilman, scored the narrow win over former Republican mayor Hal Daub. Suttle won 50.7% of the vote, to Daub's 48.7% of the vote.

...In the same election, voters elected a city council that will, for the first time in two decades, have a Democratic majority. Four of the city's seven council seats went to Democrats.

Back in the dark ages (my high school years, the 60's), Omaha was a Democratic stronghold, albeit of the Prendergast variety. Irish catholic mayors (vote Quimby!), Italian catholic council members, career bureaucrats, police, etc. The spirit of Jack and Bobby was strong.

We picketed the hell out of George Wallace, demanded an end to war, protested the pants off Nixon, cheered like crazy for Gene McCarthy and gave the '68 primary to Bobby.

And then all hell broke loose, Nixon scared the crap out of the suburbs and Omaha went over to the Dark Side.

Well, as has been said, and this, too, shall pass. Congratulations, Obamaha, you've made a native son very proud.

(P.S. I'll be sure to congratulate them when I'm 'back home' next month to see the College World Series, be with my father on Father's Day, visit a couple of favorite eateries, and see my sister in the title role of Gypsy at the Omaha Community Playhouse. Way to go, Judy!)

Persistence of Memory is a favorite episode. 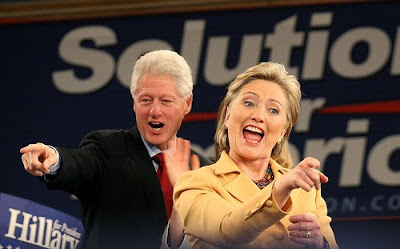 With the retirement announcement of Justice Souter, all I can say, in furtherance of exploding wingnut heads, is:

Ladies and Gentlemen, may I present Associate Justice of the Supreme Court, Bill or Hillary Clinton.