TSA/Airport Intrusion Just the Tip of the Wedge 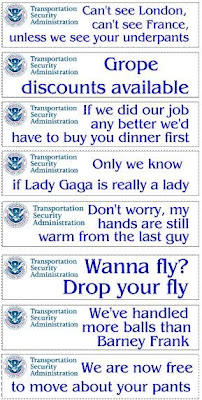 (click pic to embiggen)
Ben Franklin would be appalled.

And at least five of the "great" minds on the Supreme Court think this is just dandy.

Our freedom is slowly being eroded in exchange for a false sense of security.

The rich get richer and the poor kids keep marching off to war.

Bin Laden must be laughing his ass off.  One rotten little man in a cave (compound, whatever) changing an entire society from half a globe away to prove his god has the bigger dick.

And we fall for it.

This is all so reminiscent of the Fall of Rome that it's scary.

And meanwhile we cook the planet just to keep things "edgy". Sheesh.